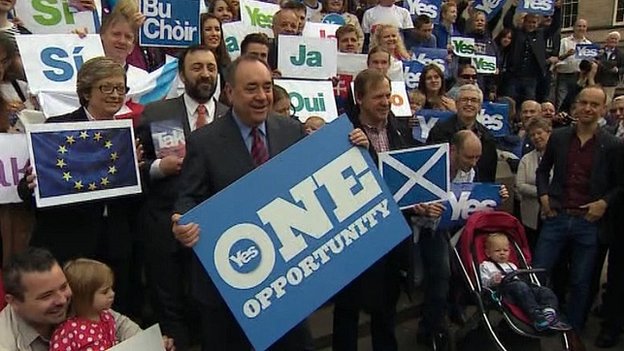 Alex Salmond outlined the benefits of an independent Scotland in Europe, while on the campaign trail

Scottish independence would give the nation’s profile its biggest ever boost in Europe, First Minister Alex Salmond has said.

Ahead of the 18 September referendum, Mr Salmond said a “Westminster elite” was jeopardising Scotland’s EU future.

However, campaigners for the Union said nobody could trust a word Mr Salmond had to say on Europe.

Mr Salmond, who was campaigning in Edinburgh’s Parliament Square – home to the old Scottish Parliament – hit out at Prime Minister David Cameron’s offer of an in-out EU referendum, if the Conservatives won the next election.

“An independent Scotland will be an enthusiastic member of the EU, in line with our long-held international and outward-looking focus and values.

“We’ll be able to argue directly for Scotland’s interests and win a better deal for our farmers, fishermen and others.”

Scottish ministers, who previously argued the nation’s EU membership would be “automatic” under independence, said Scotland’s terms of entry would be negotiated “from within”, given its current status as a UK member.

But Deputy Scottish Labour leader Anas Sarwar said: “No-one can trust a word Alex Salmond says on Europe – he has already been caught out lying on Scotland’s place in the European Union and, today, he has tried again to trick Scots about their future.

“The truth is it is Alex Salmond who is causing uncertainty about Scotland’s future in the European Union after separation, and his lies to the people of Scotland won’t do.”

Another intervention into the debate on Scotland’s future EU membership came from former President of the European Parliament Pat Cox.

He said: “The EU and its history and questions of enlargement or withdrawal is that the European Union, its institutions and its member states have always and only ever been enablers of the democratic will of people.

“Europe enables democracy. If Scotland chooses independence, I would argue on precedent that Europe would enable that choice.”

He also dismissed former European Commission President Jose Manuel Borosso’s suggestion that an independent Scotland would find it “extremely difficult, if not impossible to join the EU.

He added: The Scottish case is a case apart

But pro-union campaign Better Together have cited comments made by the President of the European Council and the future and current European Commission presidents, to support their view that Scotland’s accession to the EU would be far from straightforward

The nationalists have not answered how we would get back into the EU, how long it would take, and crucially, what terms and conditions we would join on.

Today we have special deals like our UK rebate, which is worth £135 a year to families in Scotland. Separation would put that at risk

Speaking in July the source said Mr Juncker has made his position on this clear on many an occasion. This is an internal matter of the UK and he will respect the result of the Scottish referendum