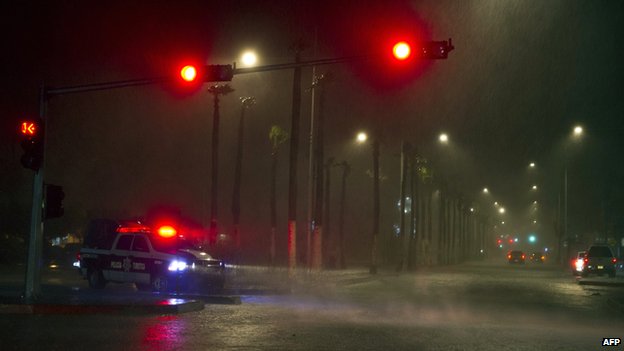 Hurricane Odile has hit the resort of Los Cabos in western Mexico, uprooting trees and confining thousands of holidaymakers to their hotels.

The storm – rated category three, with winds of up to 200km/h (125 mph) made landfall on the southern tip of the Baja California peninsula.

Mexican authorities have declared an alert in the area, warning of storm surges, landslides and flooding.

They have also prepared shelter for some 30,000 people.

US Marines have been placed on stand-by to operate emergency equipment in case of landslides.

The US National Hurricane Center in Miami had earlier said Odile would be a category four hurricane, with winds of up to 135 mph, but it lost some strength as it reached the coast.

Officials said electricity would be shut off in the area to avoid damage from power lines if they came down.

At least 26,000 foreign tourists and 4,000 Mexicans were in the region, local officials said, and those in areas at risk of flooding were being evacuated.

The region is home to massive resort complexes, as well as fishing communities and low-lying shantytowns.

Los Cabos resident Felipa Flores said she was heading for a shelter. “Later on we’re going to be cut off and my house of wood and laminated cardboard won’t stand up to much,” she told the Associated Press news agency.

Luis Puente, the head of Mexico’s civil protection agency, told reporters that 164 shelters had been readied with a capacity for 30,000 people.

Storm experts said it was set to be the strongest hurricane to hit the southern tip of the peninsula since Kiko in 1989, which landed as a category three.