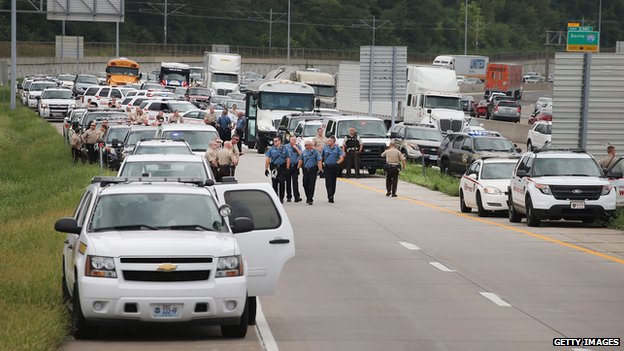 Police outnumbered protesters at the Interstate 70 highway, preventing them from blocking the road

Police in Ferguson have stopped protesters angry over the shooting of an unarmed black teenager last month from trying to block a nearby highway.

Police said 35 people were arrested as they tried to reach the Interstate 70 highway, but added that the protest was largely peaceful.

Many in Ferguson have demanded the arrest of the white police officer who shot Michael Brown, 18, on 9 August.

Officer Darren Wilson has been on administrative leave since last month.

Organisers said the protest was specifically held in the same location as a similar demonstration in 1999.

On Tuesday, city leaders, mostly white, were heckled by the largely black crowd of residents at Ferguson’s first city council meeting since the shooting.

His supporters say the teenager was trying to surrender when he was shot by Officer Darren Wilson after being stopped for walking in the middle of the street.

Ferguson, which has a population of 21,000, is a majority black city. Many residents questioned why the mayor, James Knowles, and five of the six city council members were white.

I heard the mayor say Ferguson doesn’t have a race problem said resident Taurean Russell. There must be two Fergusons.

Before the meeting, council officials announced proposals to reduce the revenue collected from court fines.

Critics have said this discriminates against low-income defendants who cannot afford private attorneys and who are often jailed for not paying the fines quickly enough.

But the proposals were drowned out by anger from the audience who said nothing had changed since Brown’s shooting.

There were demands for the arrest of Mr Wilson who is currently on administrative leave from the Ferguson Police Department while a grand jury determines whether charges should be filed against him.

Last week, the US Justice Department announced it was launching a broad investigation into whether there was racial discrimination in the department.

This is separate from a federal inquiry and the grand jury investigation into Brown’s killing.